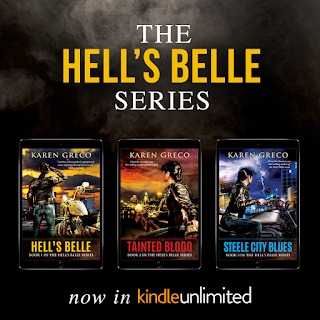 Half vampire, half human, Nina Martinez spent most of her life underground as part of an elite secret team of government agents that quietly take down rogue monsters, the human world none the wiser. She moves back to her hometown of Providence, RI to keep an eye on the recent uptick in supernatural activity, and to help run the bar she co-owns with her aunt.

Her attempt at a “regular” life, not to mention a budding relationship with smoking hot FBI agent Max, is cut short because of a string of ritual murders targeting the city's community of witches.

But Nina's investigation unearths deadly secrets from her long buried parents. Now the target of supernatural assassins, could Nina be the most dangerous vampire hybrid to ever exist? No wonder she can’t get a date.

After surviving a vampire assassin (not to mention an awkward affair with a hot FBI agent that ended worse than she could have imagined), witch/vampire hybrid Nina Martinez is reunited with the full Blood Ops team in Providence, Rhode Island. Her Aunt Babe is tutoring her in all things witchcraft, and her vampire partner Frankie is enjoying the benefits of daywalking, courtesy of a demon spell.

When a segment of the Rhode Island vampire population is marked for death by a tainted blood supply, Nina and her team race to find Patient Zero before the local vampire population is wiped out. But when a demon infestation threatens to take control of the city, Nina must join forces with newly elected mayor—and closet demon— Ami Bertrand before the city falls into ruin.

Filled with fast-paced, edge-of-your-seat action, Nina and her group of supernatural misfits battle a surprising new enemy that threatens their very existence.

No wonder she still can’t get a date.

Blood Ops leader Dr. O is chained in the bowels of Steele City, the state’s maximum security prison, and the clock is ticking for Nina and Frankie to bust him out.

Now that supernatural creatures are out of the closet, Providence is descending into an apocalyptic wasteland. With the abrupt shut down Blood Ops, Nina and Frankie are forced to rely on questionable allies to battle Leila, a powerful witch/vampire hybrid hell bent on creating an indestructible supernatural army. She also happens to be Nina’s mom.

Alliances are tested and relationships fractured as Nina and her band of supernatural crime fighting misfits are pushed to the breaking point.

Steele City Blues, the third book in the Hell’s Belle urban fantasy series, is high-octane, action-packed, cinematic story by Karen Greco that fans of The Hollows and the Cassandra Palmer series will love. Join the adventure!