Hello everyone! I would like you to introduce you to My Greek Island Summer by Mandy Baggot in this blog tour. I actually am currently reading this and loving it! So, review coming soon! Thank you to Victoria from Head of Zeus for the e-copy and this blog tour opportunity. I was supposed to post this on the 23rd, but for some reason, I noted 27th by mistake and hence am late to the party, I would like to apologize for that. Since I have already delayed it, without any further ado, here's the book details! 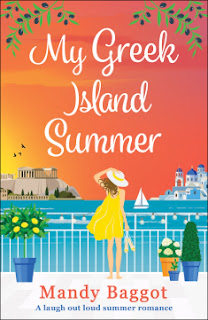 SYNOPSIS:
Two weeks. One unforgettable trip to Corfu. A chance to change her life.


Becky Rose has just landed her dream job house-sitting at a top-end villa on the island of Corfu. What could be better than two weeks laying by an infinity pool overlooking the gorgeous Ionian waters while mending her broken heart.
Elias Mardas is travelling back to Corfu on business whilst dealing with his own personal demons. Late arriving in Athens, Becky and Elias have to spend a night in the Greek capital. When they have to emergency land in Kefalonia, Becky’s got to decide whether to suck up the adventure and this gorgeous companion she seems to have been thrown together with or panic about when she’s going to arrive at Corfu…
Finally reaching the beautiful island, Becky is happy to put Elias behind her and get on with her adventure. Until he turns up at the villa… 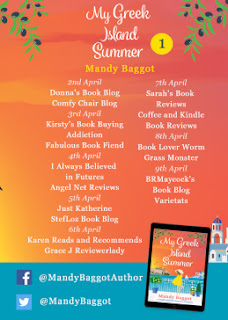 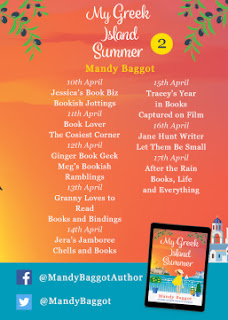 ‘If you want my opinion, dear, I think she’s forgetting where she comes from,’ Hazel said, ripping open a bag of salted nuts, some of which sprayed across the table between them.
‘What d’you mean?’ Becky asked.
‘You hear about it, don’t you? In the news and everything. These entrepreneurs who set up their own little companies then… boom!’ Hazel made an explosion gesture with one hand, corralling peanuts with her other. ‘The firm takes off and their humble beginnings are distant memories… or forgotten about completely.’
Becky really didn’t want to believe that was what was happening with her sister. Megan had set up It’s A Wrap with her share of the reasonably small inheritance she’d been left by their father. Megan had always had a will to succeed. It stood to reason that she would be the one to be her own boss and rise above her position as the daughter of a working-class family from Wiltshire who never really had much to rub together. When the idea was mooted, Becky had deliberated hard about leaving her straight-out-of-college job at the bank to assist her sister but, in the end, family loyalty had won out. And she enjoyed it, for the most part. All the parts that weren’t today.
In complete contrast, Becky’s small inheritance wasn’t yet destined for anywhere. Hence why she’d been quite happy to lend most of it to Megan to buy the It’s A Wrap van. And Megan had promised it was only a loan. Anyway, what did Becky need the money for really? She was perfectly happy renting her flat above the newsagent. It wasn’t like the new estate home Tara and Jonathan had just bought, but the cost was reasonable because it wasn’t double-glazed and didn’t have a parking space. And when you didn’t struggle with the cold and didn’t have a car these things were of little importance. So, Megan had the business and a home with boyfriend Dean and their mother had used what she’d been given after probate to buy a mobile home in Blackpool. Margery Rose now spent her evenings and weekends quite happily playing 10p bingo and dancing at the Tower Ballroom with her sister, June.
‘You were thinking about your dad, weren’t you?’ Hazel carried on.
‘No,’ Becky lied. She wasn’t sure how much Hazel knew about the loss of her father. It’s A Wrap had been established two years after his death and, still upset about the suddenness of his demise then, Becky hadn’t really liked to talk about it too much. Even now, Megan liked to talk about it even less. For her sister, apart from the monetary foundations her life and enterprise were built on, it was like their parents had barely existed. Becky had been to Blackpool twice since her mum’s move, Megan had simply made her excuses.
‘Death is hard, dear,’ Hazel told her. ‘Especially when you’ve got others wanting to brush it under the carpet.’ She sucked at her cocktail. ‘You’re not a brusher-under-the-carpeter though, are you?’
‘Apparently not,’ Becky said again. And she didn’t want to be. Not when she had so many wonderful memories of the times they had all been a happy family together when she was a child. Walks in the local woods, picnics at the park, watching motorbike racing at Thruxton… until the massive stroke had replaced the dad she knew with someone who had to learn to walk, talk and think all over again. But him being alive at all was much better than losing him completely. It might have been within the walls of the care home surrounding them, but Becky had still got to see him, to talk to him and to help him try to recover. There had been small shards of the man she’d looked up to still there, visible just under the surface. Until the second stroke took it all a year later.
‘You know what you need, dear, don’t you?’ Hazel said, hand going into her handbag. It was one of those bags that turned into a backpack should leisure pursuits require it. ‘A cruise!’
Spattering more peanuts, Hazel thumped down a wad of around six brochures Becky never would have believed would have been able to fit in the handbag onto the pub table.
‘That’s what I’m going to be doing at the end of October. I’ve got two weeks booked off and I’m going to be wined and dined twenty-four hours a day,’ Hazel informed them, throwing open the first brochure that had a mammoth ship-to-rival-all-ships on the front cover, sitting like a cake-topper on a completely tranquil skein of azure-coloured icing.
Becky immediately caught sight of the prices. Wow! Cruises did not come cheap.
‘And in the hours I’m not being wined and dined,’ Hazel continued, ‘I’m going to try my hand at shuffleboard, then acrobatics… and then more wining and dining.’ Hazel inhaled. ‘Look at that steak. Beautiful.’ 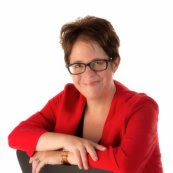 Mandy Baggot is an internationally bestselling and award-winning romance writer represented by Tanera Simons of The Darley Anderson Literary, TV and Film Agency.
The winner of the Innovation in Romantic Fiction award at the UK’s Festival of Romance, her romantic comedy novel, One Wish in Manhattan, was also shortlisted for the Romantic Novelists’ Association Romantic Comedy Novel of the Year award in 2016. Mandy’s books have so far been translated into German, Italian, Czech and Hungarian.


Mandy loves the Greek island of Corfu, white wine, country music and handbags. Also a singer, she has taken part in ITV1’s Who Dares Sings and The X-Factor.
Mandy is a member of the Society of Authors and lives near Salisbury, Wiltshire, UK with her husband and two daughters.
Website: http://www.mandybaggot.com / Twitter: @mandybaggot / Facebook: @MandyBaggotAuthor 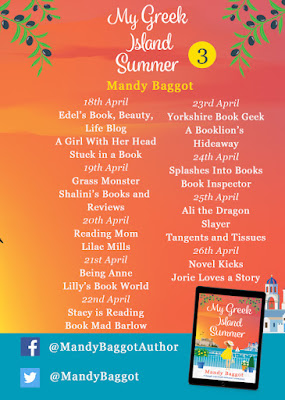