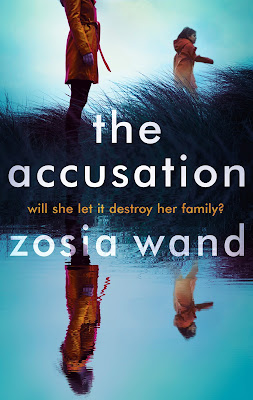 Who would you choose if you had to - your daughter or your husband?

Eve lives in the beautiful Cumbrian town of Tarnside with her husband Neil. After years of trying, and failing, to become parents, they are in the final stages of adopting four-year-old Milly. Though she already feels like their daughter, they just have to get through the 'settling in' period: three months of living as a family before they can make it official.

But then Eve's mother, Joan, comes to stay. Joan has never liked her son-in-law. He isn't right for Eve; too controlling, too opinionated. She knows Eve has always wanted a family, but is Neil the best man to build one with?


Then Joan uncovers something that could smash Eve's family to pieces...
Buy links:

1.  What book from your childhood still has a place in your heart today?

Enid Blyton’s The Magic Faraway Tree. I loved the magical characters that lived in the tree, the different worlds that arrived through a passing cloud in every chapter and the dynamic between the siblings and their visiting cousins in each book.  I would like to adapt the books into a family show for Lancaster’s Williamson Park summer promenade production one day.  I did an adaptation of Hansel and Gretel and Other Tales from the Forest  a few years ago and it was great fun creating a story that worked on several levels, for adults and children.

2.   Which fictional character stayed with you long after you finished the book?

Zenia, from Margaret Atwood’s The Robber Bride.  She was darkly compelling and all the more intriguing because we were introduced to her from the point of view of other characters and not from her directly.  Rather like Daphne Du Maurier’s Rebecca.

3.   Can you tell us a little about your journey with your new release?

My daughters are adopted, so I have an inside eye on the adoption process.  It is often misrepresented in the press and certainly in television drama.  I wanted to tell a story where the social worker was a competent, sincere human being and not a clichéd scapegoat to provide a thrilling plot point.  The threat in my novel comes from the most unlikely source.  I was also interested in exploring that wonderful, but vulnerable time, when the child you are adopting is settling in and you are beginning to form a bond.  Legally, you are not yet their parent and for Eve and Neil, with a limited local support network, this puts them in a precarious position when an accusation is made. The future of their family is in jeopardy.

4.   Do you get an emotional connection to your characters?

There is a part of me in every character I create.  I have to imagine myself as them and get right inside their heads.  It’s a little like being an actress, without having to face an audience.  I have to really know them, as well as I might know close family.  By the final draft I know them well enough to put them in any situation and I will know precisely what they will do.  I don’t always condone their behaviour or admire it, but I do understand it.

Truly Madly Deadly by Liane Moriarty.  My brother sent me the box set of Big Little Lies as a gift and I was gripped.  I rushed straight out and bought The Husband’s Secret and Truly Madly Deadly.  These novels are delicious.  The delightful characters are enticing and familiar.  She explores the underbelly of contemporary family life.  Behind the domestic bliss everyone has secrets.  Her observations are sharp and hilarious and the dilemmas she poses always leave me thinking – what would I do in that situation?  It’s my ambition to write like Liane Moriarty.  My next novel will have three points of view to allow me a little more distance and give more scope to have fun.

6. If your book came with a theme song what would it be?

Maternal love – what it is, how it manifests itself, what we perceive or expect it to be.  Who deserves to be a mother?  At what point does maternal love become toxic?

7.  Is the genre you write your favourite to read?

I like books that explore complicated family dynamics.  Blended families, step families, unusual families of any kind.  The thriller aspect isn’t essential, but I do like a novel to have a good pace to it.

8.  If you could ask your readers anything, what would you want to know?

What lingered.  I read a lot of books and enjoy them, but frequently forget them as soon as I’ve started the next one.  Some linger.  It’s to do with characters and how compelling they are, how individual, whether or not they get under your skin.  I strive to create characters that linger.

9. What are you working on now?

The Treehouse is a novel about a group of friends who, as teenagers, were involved in a tragedy when Mark fell to his death.  No-one really knows exactly what happened that night. Now in their early forties, Marks’s sister returns to challenge the status quo and force them to revisit that time.  Old secrets resurface and the stakes are high.

Zosia Wand is an author and playwright. She was born in London and lives in Cumbria with her family. She is passionate about good coffee, cake and her adopted landscape on the edge of the Lake District. Her first novel, Trust Me, was published by Head of Zeus in 2017.