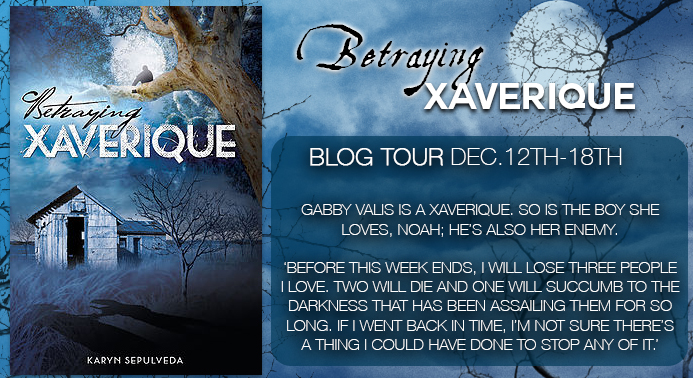 Gabby Valis is a Xaverique. So is the boy she loves, Noah; he’s also her enemy.

Gabby and her family are once again thrown into battle with Zlanythe and his crew after they seek revenge by killing one of their own. To defeat evil though, one must first understand it and delving into Zlanythe’s past initiates the ultimate fight between good and evil.

‘Before this week ends, I will lose three people I love. Two will die and one will succumb to the darkness that has been assailing them for so long. If I went back in time, I’m not sure there’s a thing I could have done to stop any of it.’

This excerpt is taken from www.karynsepulveda.com

Sophia gripped the metal handrail, watching the veins in her thin hands pulsate rhythmically. Soon, the flow of blood would stop, she thought. She would never have to worry about the fighting, the screaming, the hatred, ever again. Sophia closed her eyes and breathed in the fresh air. It smelled of trees, of rain and of peace. She wasn’t scared now; the pain would soon be gone. She would soon be gone. Sophia opened her eyes, gazing at the thick bush that filled the deep valley beneath her. She quickly glanced behind her, to make sure no-one was around. She didn’t want to traumatise anyone by dying in front of them. But the bridge was deserted. Sophia looked straight up into the drizzly grey sky and then she simply stepped off.

As she fell, Sophia didn’t think of anything. Her life didn’t flash before her eyes; she didn’t feel regret or fear. She just fell; completely aware of the wind rushing through her, the tiny droplets of rain splattering her face, the weightlessness of her empty stomach and then… Nothing. It was over.

‘Hold still. Don’t try to move. Not yet.’ A deep voice filled the darkness. Sophia was thrashing about, lying amidst broken branches and thick wet grass. Her arms and legs seemed to be moving by themselves. Her back arched, creating a nauseating crunch. She opened her eyes, but everything was blurry. She managed to focus on her hand, staring at the blue veins that had not changed. She was still alive. How?

Sophia squinted. Someone was hunched over, cradling her in his slender arms. The stranger brushed the hair from her eyes and helped ease her to a sitting position. Their faces were close now and he was wiping something wet from her cheeks. He was an angel, she realised. He had to be. All the crap she’d gone through in her life had been worth it. She was in heaven and this was an angel greeting her.

‘Well, you must be OK if you’re smiling. I’m Nathan; it’s nice to meet you, Sophia.’ The angel put his arm around Sophia and guided her to her feet.

Sophia looked down at her body. She was soaked, muddy, and her clothes ripped to shreds. But there was not a scratch on her. She’d felt crushing pain for a moment, she remembered, before she’d blacked out. But now, here in heaven, everything was OK. Sophia, for the first time in many years, felt OK. She must have been smiling again because the angel was smiling too.

She nodded her head. ‘Are we going to stay here?’ She asked, wondering where the fluffy white clouds she’d heard about in primary school were.

‘Is it a cloud?’ Sophia asked as Nathan took her hand in his and began walking up the steep, bushy wall of the valley.

Nathan chuckled. ‘No, just a regular flat I’m afraid. Are you sure you’re OK? How much do you know about transitioning? Physically, you regenerated perfectly. But it must be a lot to absorb.’

‘I’m OK. I wanted this. I didn’t want to live anymore, so I guess that’s why I regenerated or transitioned or whatever so well. I’m happy to be dead. I didn’t think it would feel so, real.’

Nathan stopped walking and turned to face her. He was higher up and towered over Sophia, but there was not a single intimidating feature in this man. Everything about him was gentle and calm. His soft brown hair fell easily around his delicate face. And blue eyes that Sophia imagined herself swimming in radiated kindness. Sophia felt an odd sensation around him; trust.

‘I jumped from a bridge. I’m dead,’ Sophia said. Of course she had to be dead. But as Nathan shook his head, she couldn’t explain why she knew that she wasn’t. That something else had happened.

Sophia held Nathan tightly. ‘Why do you have to go?’

Nathan wrapped his arms around Sophia. ‘I’m going to the shops, we need groceries.’

‘We can survive without food, we’re strong enough,’ Sophia said and kissed Nathan firmly on the lips. He returned her kiss, but pulled away when she started running her fingers through his hair.

Sophia sighed loudly and threw herself onto the huge bed. She laid her head on the soft pillow. ‘Fine, but get me some chocolate.’

Nathan laughed and kissed her on the forehead. ‘I forget how young you are sometimes. Chocolate it is.’

Sophia sat up and threw one of the pillows at him. ‘Eighteen is not that young!’

‘Of course it isn’t.’ Nathan threw the pillow back and Sophia ducked.

‘I’ll see you soon,’ Nathan said and whistled as he closed the door to their apartment behind him.

Sophia smiled and lay back down on the comfortable bed. She still wasn’t used to feeling so happy. She and Nathan had been living together for over two years, ever since the day he found her broken, under the bridge. She could barely remember the desperate misery she had felt during the days before she decided to jump. The life she’d had before Nathan was now just a blur.

She continued to smile as she ran a hot bath and began undressing. As she slipped her dress off and stepped into the steaming water, she thought about Nathan’s eyes. They were blue, but not just any blue; they were the dark blue of the ocean. Every time she looked into them she felt she would always be happy. Sophia bunched up a dry hand towel and placed it under her head to act as a pillow as she lay in the lavender-scented bath. She breathed in deeply and felt happiness reach every part of her body. Yes, she was undoubtedly the luckiest Xaverique that ever existed.

Sophia woke with a start. The water was cold and the bathroom had darkened. She was shivering and reached for a towel. She wrapped it around her body and rubbed at her arms, trying to warm up. She heard the front door close.

‘Nathan?’ Sophia called out and opened the bathroom door. Nathan was standing in the entrance. He was looking around the apartment.

‘Sophia, ah, hello,’ he said in his deep voice. He had no shopping bags with him.

‘Oh,’ Nathan glanced at his empty hands. He looked up again and this time he smiled. ‘I must have forgotten them.’

‘But you were so hungry. Did you eat out? Where have you been?’

‘I had something to attend to.’ Nathan walked slowly towards Sophia and she got the goosebumps. She wasn’t sure if it was because she was still cold from the bath or if it was a warning. Something about Nathan was different.

He stood in front of her and looked her up and down. She pulled the towel tighter and shivered.

‘So what did you do?’ she asked again.

Nathan glared at her.

‘None of your business.’ Sophia took a step back. Something was very wrong. Nathan had never spoken to her like that before. His voice was different too; it was coarse and cold. He threw his head back and laughed.

‘Take a joke will you? Actually, I think I will go back out and eat. See you.’ He looked into her eyes for a moment, then turned and stormed out. Sophia’s body froze, as she realised his eyes were no longer blue; they were black.

Before this week ends, I will lose three people I love. Two will die and one will succumb to the darkness that has been assailing them for so long. If I went back in time, I’m not sure there’s a thing I could have done to stop any of it. The guilt lies with one person; Sophia. And I will never forgive her. 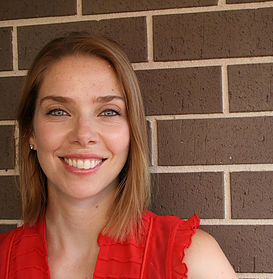 Karyn comes from a background in teaching and theatre. Teaching drama, and writing and directing Theatre in Education productions. She’s always loved creating stories and characters, so completed a Masters in Creative Writing at Macquarie University.


It was here that her journey of writing Choosing Xaveriquebegan. Now, six years later, she is just a little bit thrilled it has finally been published! Karyn is currently working on the sequel to Choosing Xaverique, slated for production later this year.

Posted by a booklion's hideaway at Wednesday, December 14, 2016