Divorce lawyer Victoria Slade has seen enough unhappy endings to swear off marriage forever. That doesn't mean she's opposed to casual dating—just not with her cocky new neighbor, who is as gorgeous and tempting as he is off-limits. But once she agrees to take on his sister's case, she's as determined to win as ever—even if that means teaming up with Ford…

Investigative journalist Ford Dixon is bent on finding the man who got his sister pregnant and left her high and dry. He's willing to partner with Victoria, despite the fact that the beautiful brunette gets under his skin like no other woman. He might not be looking to settle down, but there's no denying the scorching attraction between them. Still, the more time he spends with Victoria, the more he realizes that the one woman as skeptical about love as he is might be the only woman he could really fall for… 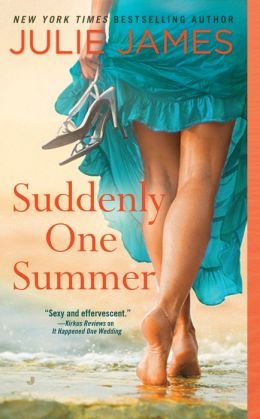 Julie James is back with another awesome book, Suddenly One Summer! It is a spin off of FBI/US Attorney series. And as predicted, I thoroughly enjoyed it.

We meet Ford Dixon in Love Irresistibly book as Brooke's best friend and I've wanted to read about him since then. And after a long wait we get his book.

Victoria is a divorce lawyer and cause of her past with a jerk of a father, doesn't believe in true love, marriage and all. Ford likes being single and has no intention of being in a relationship either. Also has some issues with his father.

Victoria shifts into a condo for a summer as a result of leaving her town house due to an attempt of robbery at her place. So she ends up being Ford's neighbour. There is a lot chemistry when they see each other but they don't get off to a nice start as Victoria makes some harsh judgement about Ford immediately after seeing him around. To which Ford retaliates and as its a Julie James book, there is a banter.

One day Victoria stumbles upon a crying, toddler carrying woman in the corridor, who turns out to be Ford's sister. And in the end, Victoria ends up agreeing to help Ford's sister find her daughter's father. So Ford and Victoria play nice and help each other with finding the guy.

They start off with a casual relationship, slowly slowly falling for each other. But struggling with her issues, Victoria did irritate me a little by messing up a little with Ford but in the end everything works out well for everyone.

We don't meet many FBI/US Attorney people, but there is a lot Brooke and we also get to meet Vaughn and Cade for a bit. It was a great book filled with funny banter too.

“Audrey’s head spun. “You puked in the alley? Wow. You must really like him.”
“Oh, God. Don’t say that.” Victoria bent her head over her knees and took slow, deep breaths.
“The vomiting seems to be her way of expressing her feelings toward Ford,” Rachel told Audrey.
“Aw. And they say romance is dead.””

“Hands hovering over the keyboard, he paused and looked over. “I’m going to begin typing now, so you might want to brace yourself for the onslaught of sexiness.”

*
“Fine. We’ll just sit here and listen to music.” She reached for his phone again.
“Have you heard Taylor Swift’s new song?”
“No.”
“Well, you’re going to—on endless repeat until you start talking.”

"He moved closer and cupped her face in his hands. “I love you.”
Her eyes filled with tears, her expression suddenly so hopeful and vulnerable it made his heart ache. “Really?”
“Yes.” He smiled softly. “Like, crazy, awful, miserable-without-you kind of love...”

Posted by a booklion's hideaway at Thursday, August 13, 2015