Review: A Lot like Love (FBI/US Attorney, #2) by Julie James

The FBI wants her cooperation...
As the daughter of a billionaire and the owner of the city's top wine store, Jordan Rhodes is invited to the most exclusive parties in Chicago. But there's only one party the FBI wants to crash: the charity fundraiser of a famous restaurateur, who also happens to launder money for the mob. In exchange for her brother's release from prison, Jordan is going to be there—with a date supplied by the Bureau.
Agent McCall just wants her...
As the top undercover agent in Chicago, Nick McCall has one rule: never get personal. This "date" with Jordan Rhodes is merely an assignment—one they're both determined to pull off even if they can't be together for five minutes before the sarcasm and sparks begin to fly. But when Nick's investigation is compromised, he and Jordan have no choice but to pretend they're a couple, and what starts out as a simple assignment begins to feel a lot like something more. 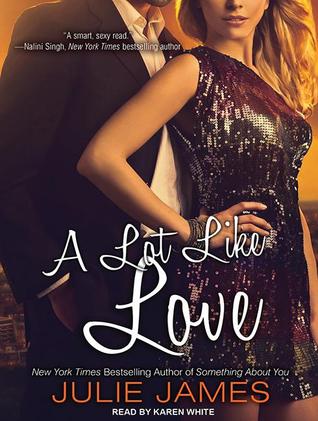 The cover is of an audiobook, but I love this one the best.

Nick McCall is a FBI agent. Jordan Rhodes is a daughter of a billionaire and a twin sister of Kyle, who is locked up in prison for quite an interesting thing he did. Jordan was a down to earth girl, who owns a successful wine store in Chicago. I liked her.

FBI Agent Nick McCall is assisting a junior agent Huxley in an undercover investigation against Xander Eckhart. And Jordan is the key to get into his office during the Valentine's party at Xander's. Jordan agrees to cooperate in exchange to have her brother transferred to home detention.
But as luck would have it, instead of Huxley to be her fake date at this party it has to be Nick cause Huxley falls sick. At the party, some problems occur and that is why, they're stuck together playing boyfriend/girlfriend for more time than expected and Nick sees that Jordan is not just a rich girl and there is more to her and starts falling for her. He is very sweet to her after that and I really liked that.

I also liked the banter between them.
“It was time to break out the don't-fuck-with-me face.”

“Boyfriend huh? I didn't realize we had taken things to that level."
"Oh, I'm sorry--this is my first undercover operation," Jordan said. "I'm a little unclear about the rules. Are we seeing other people in this fake relationship?”

“It's a truth universally acknowledged that an FBI special agent in possession of great skill and talent is likely to engage in trash talk every now and then.”

We get to a little bit of Jack Pallas and Cameron(I love them) and we meet the infamous Kyle as   well.
It was a sweet and funny story. There were too many hilarious conversations in between to not enjoy it. Even though Jack and Cameron's book is my favourite, I liked this book too.

“He gripped her shoulders determinedly. 'I should’ve told you this earlier, Jordan. Now that I’ve got my chance, you’re going to hear it whether you like it or not. You came into my life and messed the whole thing up and now I’m screwed. Because I’m in love with you. As in balls-out, head-over-heels, watching-Dancing-with-the-Stars-on-Monday-nights, wine-and-bubble-bath kind of love. Hell, I think I’d even wear a scarf indoors for you.”

“Don't take this next undercover assignment. Stay with me instead."
Nick's eyes pierced hers, refusing to let her off that easily. "Tell me why."
"Because... I love you." She exhaled. No take-backs. The words were out there forever.
And it felt great.”

Jordan couldn’t keep the smile off her face. “Yeah, I like this guy. He rescued me from a crazed man with a gun, he makes me laugh, and he calls his mother Ma. I’d say he’s a keeper.”

“You've met Nick?"
"Yep, we've met, all right. He was kind enough to inform me that I have absolutely no say in whether you two date."
"Well, you don't."
"You know, you all could at least pretend that my opinion makes a difference.”

“I’d like to know more about this undercover agent who posed as my daughter’s date. The ubiquitous Tall, Dark, and Smoldering.'
Nick put on his best meet-the-parent smile. 'I generally prefer to go by Nick.”

Told you it was funny!

Posted by a booklion's hideaway at Thursday, February 26, 2015